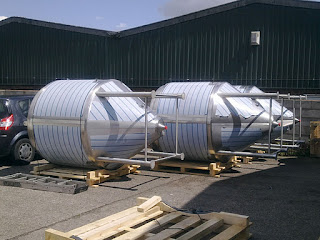 “Your vessels are all nearly ready”

I was on the phone with our equipment fabricators in Burton upon Trent, we had been talking regularly about the designs, but this was the first time I realised that we are getting very close now. Over the past month we have been preparing the floors and drainage needed to get the brewery ready for the equipment to arrive. The big ‘pots’ will be delivered to our new brewery by the end of September and then we will start plumbing them in and hooking up all the electrical wizardry. All the connections and ancillary equipment will turn it into a living, breathing, working brewery.

In the last edition we introduced you to the new XT brewery which is located at Notley Farm near Thame. The brewery is designed so we can produce a wide range of cask conditioned beers using traditional methods but with a modern twist.

We hope that the beers will be popular in local pubs but we also know you like to drink fresh beer at home. In order that you can enjoy our beers direct from the brewery we have been working to get a licence to sell from our very informal little shop on site. Next time you’re in a pub, spare a thought for the landlord who, like us, had to climb a mountain of paperwork just to hand you that pint.

There are so many different things to sort out, many of which I never even thought about in the original plans and more often it’s the smallest things that seem to take up all your time and money. I haven’t even had any time recently to brew! Hopefully we can put that right in the very near future.

As we move closer I will keep taking photos and posting them on the Facebook page so you can follow our progress to the first pint.