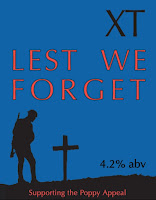 Three of Britain’s most innovative breweries have joined forces with the Royal British Legion to support the Poppy Appeal this year. XT Brewing of Buckinghamshire, Raw Brewery of Chesterfield and the Big Hand Brewery of Wrexham are collaborating on a very special beer during the month of Armistice. Each brewery is making the ‘Lest We Forget’ ale locally and following the same recipe then contributing a cut of their takings to the Poppy Appeal.

The collaboration between these breweries and the RBL with the Lest-We-Forget is inspirational and shows how forward thinking local producers can work together to help those who helped us in the defence of freedom. The members of the collaboration are all very proud to be working together and hope to extend the project further in 2016 to include more innovative craft breweries from around the country.

The beer aptly named ‘Lest We Forget’ at 4.2% is a red malty beer brewed with aromatic English malts and balanced with hops from around the Commonwealth including Galaxy from Australia, Admiral from England and Pacific Gem from New Zealand.

Encouraged by the success of the first year,  XT and The RBL worked together again in 2014 and released the beer once more to mark the month of Armistice and raise funds for the appeal. The beer spread its wings and was shipped further afield using the combined resources of other local brewers to help distribute the Lest into even more pubs and clubs.

Now into its third year two more breweries have joined the collaboration. The Raw Brewery and the Big Hand Brewery have thrown their considerable brewing experience behind the project. They are making the Lest for their local pubs and RBL clubs and raising even more funds for the Poppy Appeal.

Lest We Forget - three words renown across the world in remembrance of those who fought, and those who died fighting for freedom. It means that we will never forget! We honour the period of remembrance by wearing poppies, a flower that bloomed throughout the fields of battle grounds in France and Belgium during World War One. The poem, ‘Flanders Field’, written by Canadian physician, Lieutenant Colonel John McCrae after witnessing his friend and fellow soldier struck down in the midst of battle in the First World War.  The poem inspired Moina Michael to use the poppy as a symbol of remembrance in 1918 and was adopted by the US Legion in 1920 and the British Legion in 1921

The Royal British Legion, founded in 1921, is the UK’s leading Service charity. They provide practical care advice and support to serving members of the Armed Forces, veterans of all ages and their families. The Royal British Legion boasts some 360,000 members, they are not only a campaigning organisation challenging those in authority, with a fund-raising organisation reliant on a huge network of volunteers, but the RBL are the nation’s custodian of the Remembrance
Posted by XT Brewing Co at 21:13 2 comments:

Cervesa Mallorca! – The Growth of Craft Beer in Spain 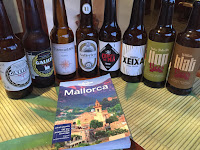 Mallorca may not bring to mind artisanal beers savoured in moderate volumes – but the influences of quality beer creeps further and further each year and this beautiful Mediterranean island is now home to several innovative micro-breweries.

No holiday would be complete without spending a little time researching my favourite local malt beverage and trying to meet up with any local brewers. Tucked away in historic towns across the island there are now seven local producers making a seriously wide range of beers. Finding them however did prove a little tricky.


I started my beer travels at a wonderful bar in the capital: Palma. Having become used to the bars selling only one ‘cervesa’, which quite often wasn’t even branded, seeing a long line of taps in the Cook & Beer brewpub was a very welcome sight. English, Belgian and a wide selection of local beers were available and all delivered up by a very enthusiastic barman-brewer who took time to talk us through all of the local breweries and recommended bars.

In the same neighbourhood as Cook & Beer is the Tramuntana Brewery and bar, named for the beautiful mountain range that runs along the northern coast and a nearby bottle shop: Del Món both well worth searching out. Forastera brewery has some funky looking beers and they are located further south towards the airport.

Heading east from Palma to Algaida, Cervesa des Pla make a very interesting soured honey-wheat beer called Xeixa. Finding the beers can prove difficult, but one of the more widely available in supermarkets is Cas Cerveser Galilea based in the mountain area of Puigpunyent. Sullerica from Soller on the western coast make a wonderful black ale brewed with cacao. The smallest brewery is Talaiotika from Porreres started by a winemaker and chef.


Beer Lovers Brewery from Alcúdia have developed a great local following and produced some wonderful English and American influenced beers and taken more to hoppier styles than some of the other local beers. They have a patio bar and hold regular beer and food matching events.


All the breweries produce an astonishing range of styles – they realise they are never going to compete for the ‘session’ lager market – the prices of ‘Euro-Fizz’ are just so low that you wonder how the cost even covers the tax and delivery. They need to persuade buyers to spend potentially ten times more for their product; so the market looks for fuller flavoured beers. Styles range from pale wheat beers all through to some very convincing dark porters and chewy stouts.


The bottled beers are all bottle-conditioned and filled at the breweries. The draught beers are on keg – but they are ‘keg conditioned’ that is to say the kegs are filled with ‘live’ beer, unfiltered and the beers then gradually develop their own ‘fizz’ so no extra gas is added.


The bottles and the draught beers are all generally pretty hazy and quite lively which seems to be the mark of a ‘craft beer’. I have noticed on the Continent and North America beer lovers have developed the idea that good beer is defined on appearance:


Versus the way the English notion that the method of dispense determines the quality:


Where really it’s simpler than that: 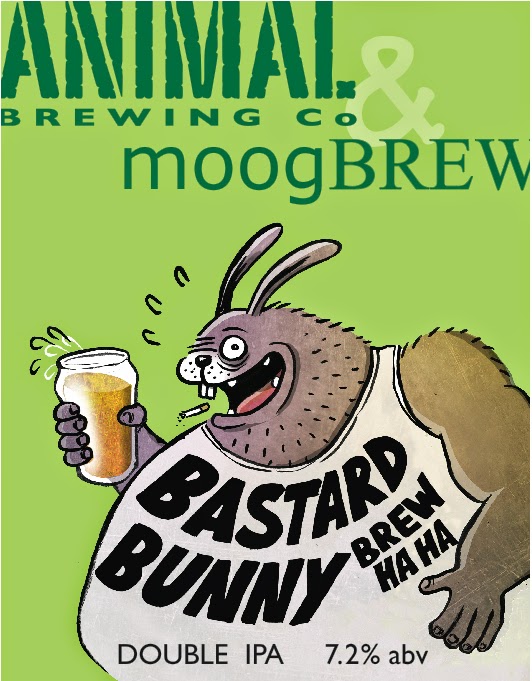 The Bunny is a collaboration brew with MoogBrew – a trendy little brewery in Taplow, Buckinghamshire. It was a chance meeting with MoogBrew at a beer festival. They said they had made a beer called Bastard Bunny… we immediately suggested a joint-brew under our Animal brand. Only Bigger. With Lots More Hops. The Bastard Bunny character is originally featured in the NME magazine - the guys from Moog are mates with Dave Anderson who created the character. The beer will be launched at the Evening Star in Brighton - here is the flyer as drawn by Dave to celebrate the Bunny ... 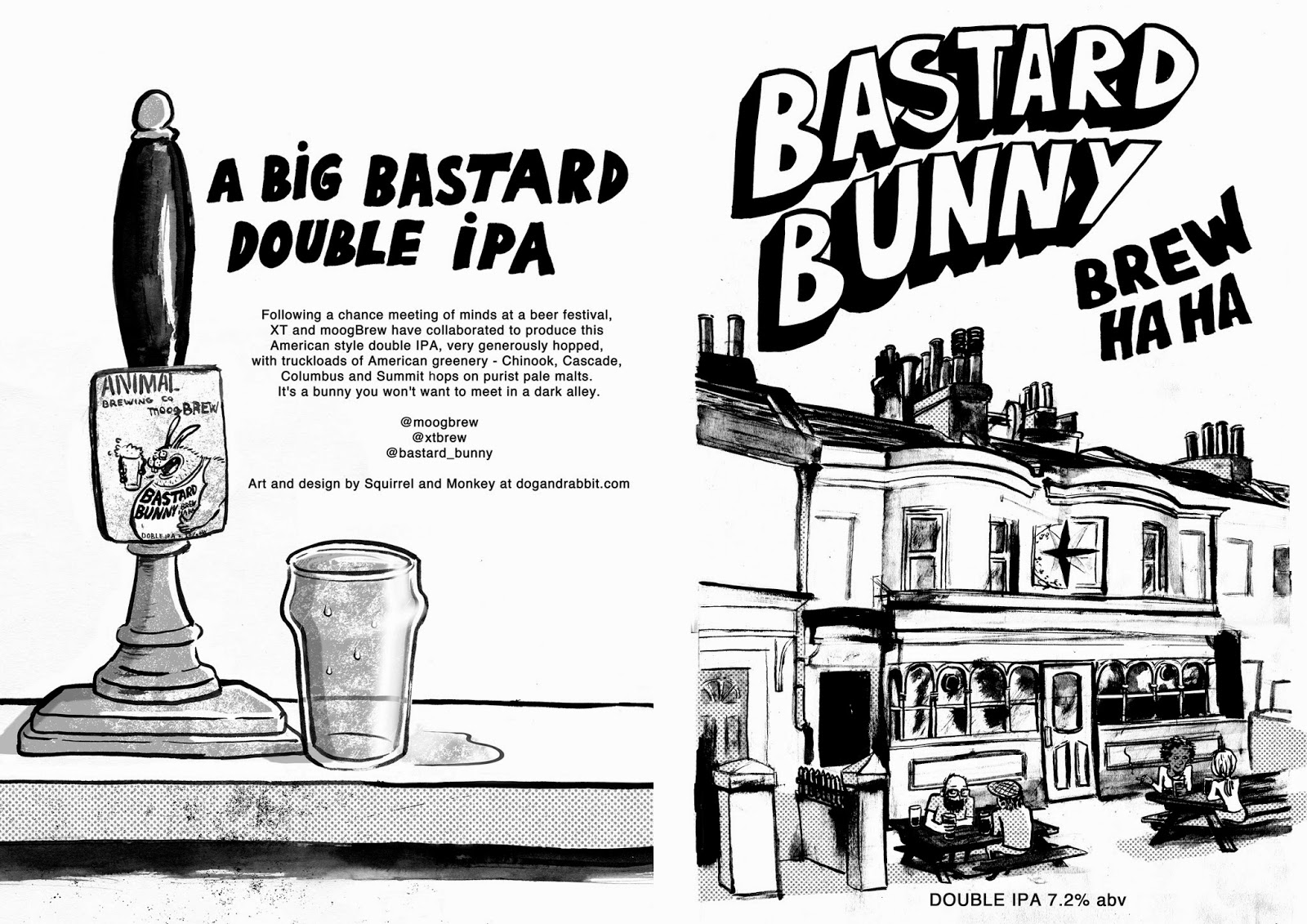 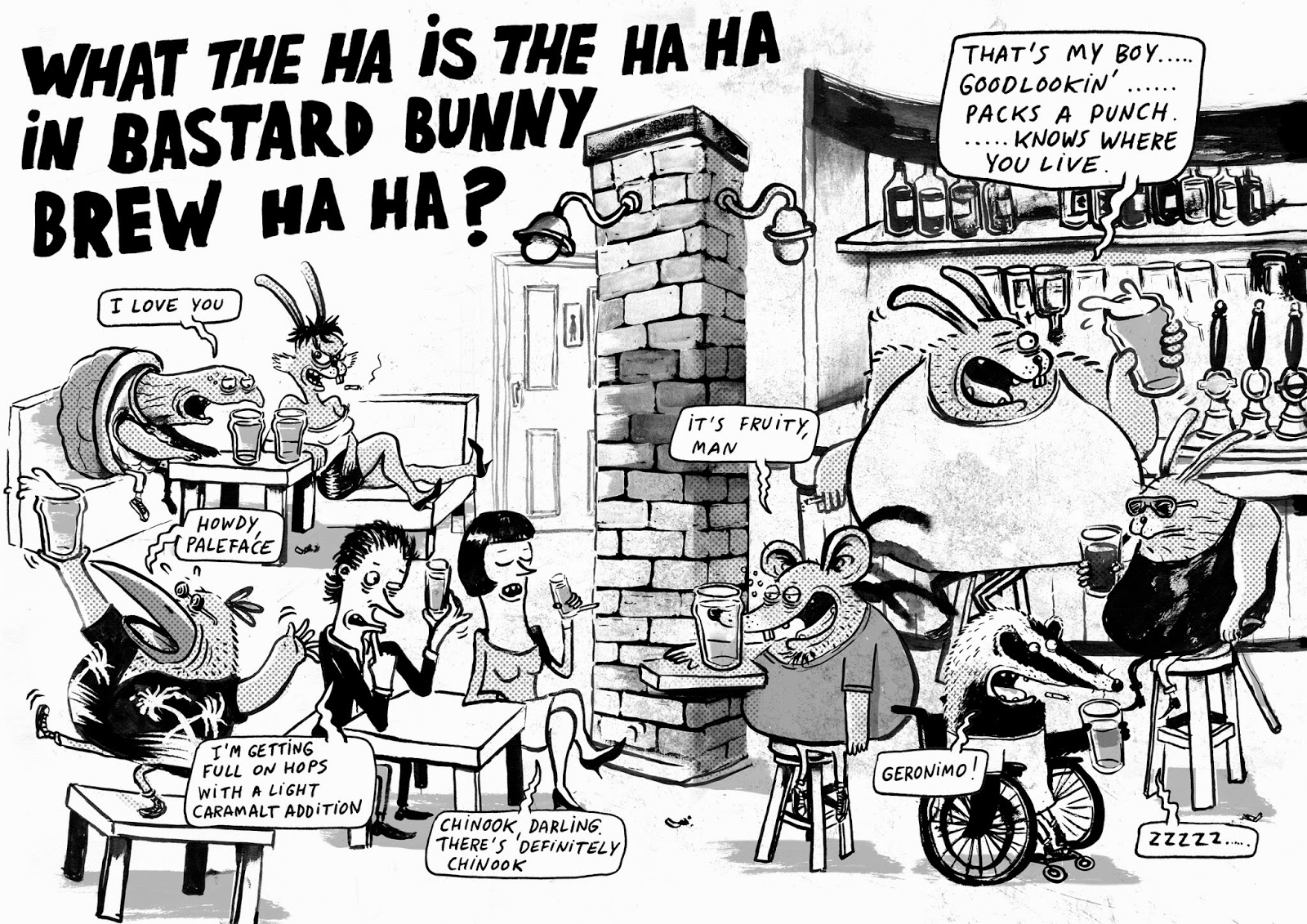