East London has a wide range of pubs and brewery tap rooms. This is a tour starting in Hackney Wick and working back towards the city centre. The route is about 4 miles end to end - but it is designed to follow the bus route 388 - so you can easily hop on and off the bus which tracks near all the pubs listed.

In Hackney Wick - start at the new Beer Merchants Tap room  - ticking everything on a craft beer bar check list - exposed brickwork, dangly industrial lights, cable trays, rough planking and a tap wall - its a great new asset to the Hackney beer scene. A decent range of keg and bottle beers and helpful staff in a spacious and airy re-purposed industrial space


A short walk away is a brace of bars which are now must-do sites for a London beer geek:

First off try CRATE - true hipster location on the canal, alternative living and anti-establishment house boats abound. Sit on the terrace watching the bikes and boats drift by. The actual brewery is across the yard and supplies most
of the beers in the bar, including a decent range of cask beers and keg from other London makers.

Within shouting distance across Queens Yard is the tank bar - Howling Hops Claiming to be the first dedicated tank bar in the UK - a selection of all in house brewed beers served direct from the tanks behind the bar. Long Teutonic style benches in rough industrial chic.

Redchurch Brewery Tap Room - Tucked away off the main road, a London classic micro brewery: in a railway arch with the ubiquitous white corrugated ceiling liner and plenty of pallet wood on show. But a real gem of a tap room and open pretty  convenient hours. Near by is the essential stop on any craft beer tour: Mother Kelly's. A long row of fridges hold all sorts of bottle beers and a menu gives access to the 20+ taps on the back wall.

A tucked away little treat is the Old Street Brewery Tap Room - follow the passage to the side of the railway and yes its a planking and white corrugated plastic trimmed tap room. But small batch brews are sold from mini serving tanks behind the bar. The enthusiastic staff talk you through their beers and clearly enjoy what they do. Outdoor seating along the passage mixes with second hand furniture and other local traders.

There is whole street of interesting pubs along Bethnal Green Road - Sun Tavern, Star of Bethnal Green, and tucked up a side road the Three Sods Taproom

Back on the main road is the quirky Well and Bucket - faded elegance of fine crumbling tiles climbing up the pock marked walls to high ceilings.

If you are feeling peckish now - its a handy detour down Brick Lane for a world of food choices. 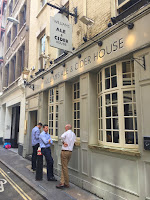 Follow up with a beer at the Williams Ale and Cider house or the Craft Beer Co St Marys Axe
Posted by XT Brewing Co at 14:12 9 comments:

Bamberg – An Adventure in Brewing, Malt, Smoke and Beer 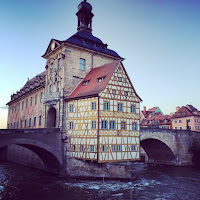 The air was heavy with the aroma of gently roasting malt as we disembarked from our train. Standing on the platform we were taken with the smell of the Weyermann maltings, its majestic brick façade towering over the beautiful Bavarian town of Bamberg.

We had travelled here to take part in a collaboration brew at the brewery attached to the 140 year old malting company. Weyermann make some highly specialist malts, many of which we use in of our XT and Animal beers. They have an amazing no-expense-spared, high tech brewery to test their malts and experiment with a wide variety of beer styles, and we had been invited here to play on it. 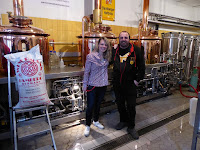 Bamberg must be one of the world’s top places for beer and it is well known for the local smoked Rauchbiers. As with much of Germany the locals are very loyal to their local breweries and the styles particular to the region. Generally I will always search out the local beers in my travels, but to only see local beer and no national or multinational brews at all was a revelation. The Germans see beer as a highly valued part of their culture; it’s not just a ‘drink’ and somehow inferior to wine. The brewing and serving of beer here is a respected career choice. 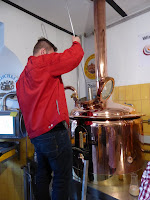 The old town of Bamberg is beautifully preserved, and a pleasure to wander around its old timbered houses, grand churches and cobbled streets. The locals get about on bikes on the many cycle paths and somehow they manage to ride normal looking machines without the need for lycra or carbon fibre. Most importantly however, Bamberg is blessed with nine breweries, all of which are within the old town environs. The breweries all have their own traditional bars attached, plus there are numerous pubs to tempt you, it’s actually quite hard to find a bad one. Here is a short list of some of our favourite breweries and bars:

Spezial - A traditional brewery which still smokes its own malts for the house speciality Rauchbier. We stayed here during our time in Bamberg, and it is well worth seeking out these characterful places – take a look on www.braugasthoefe.de for similar brewery guest houses across Germany. 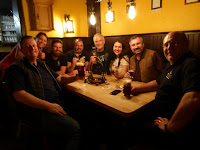 Zum Sternla – Thanks to our hosts Weyermann, who are almost the Bamberg royal family, we had the honour of sitting at the ‘top table’; this is a bit of tradition where the landlord has his own reserved table and holds his beery court. It’s a great way to meet a wide variety of the locals and get to understand the traditions and enjoy the respect that German’s have for their beer and the well trained staff that serve it with such reverence. Sampled some very fine Weissbier (wheat beer) here, which has deep rich flavour missing in many more commercial versions.

Keesmann – Famous for its Herren-Pils and Helles, but for me it was most memorable for the huge food portions which actually defeated my companion who is not normally the loser in man vs. food. On investigating the extensive brewery behind the bar I spotted a huge machine which at first I could not identify, after enquiring I learned it was for the cleaning of beer bottles. In Germany the regional breweries use standardised bottles and they regularly collect and refill them. This was eye opening and a radically different way of thinking to our own throw-away culture.

Mahr’s Bräu – Opposite Kessmann, we really enjoyed the biergarten here and, after the night closed in, the convivial conversation on long benches in the dark wood panelled bar inside. The shared tables in the bars are very much part of the drinking culture; everyone sits together and if you arouse their interest, you will inevitably be drawn into the conversation of your neighbours. This bar also introduced us to the delights of “Ungespundet” which literally means “unbunged”. It’s a process for maturing beers with open vented vessels leading to much less gassy beer. The age old Reinheitsgebot or purity law has far reaching influence over the beers here, interestingly it also forbids the use of extraneous gas in the beer, only gas from the fermentation can be in the beer. So there is a little puzzler for you real-ale purists, is German keg-beer real-ale?

Klosterbräu – Attractive riverside brewery here for over 450 years. The oldest in Bamberg.

Schlenkerla – Probably the most famous Rauchbier: Aecht Schlenkerla. The extensive bar with several panelled rooms and covered yards serves only one beer: it is black and it is very smoky. Served directly from wooden casks behind the bar, it’s a very special beer and special bar that encapsulates Bamberg and its deep beer traditions. If heaven forbid you want a different beer, you can buy the bottled helles, and yes that is smoky too! 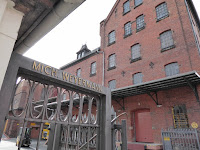 I would definitely suggest a beer adventure in Bamberg with its great beers and great bars plus the added bonus that it’s actually a very attractive town. Bamberg is certainly up there in the top ten beer cities of the world.
Posted by XT Brewing Co at 18:25 2 comments: 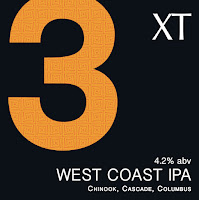