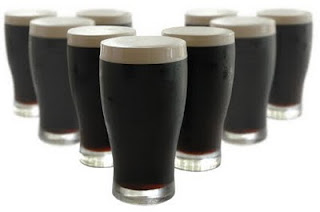 had to wait that long for a beer festival." I replied to the CAMRA steward at the Reading Beer Festival. We had arrived in good time hoping to conduct some important 'research' on the local competition, but it seemed we were out of luck. Out of luck personally, but it was certainly good news from a business perspective as it showed that the interest in real beer has taken something of an upward turn over the last few years. As we walked past the lines of festival goers it was interesting how the range of people attending has changed from how I remembered these events from days of yore. OK, so there were still plenty of Oliver Reed T-Shirts straining over well filled stomachs, and members of the old guard standing hopefully with drinking horns in hand, but the groups of younger people and notably women drinkers were very much in evidence. Things have moved on, and a wider range of people are enjoying the pleasure of a decent pint.

As the big multinationals move out of the real beer market place, like great trees falling in the forest, several new small players have moved in to take the space, and one region that has seen a huge growth in micro-breweries is Cumbria. There are over thirty six, at the last count, in that one county alone. I spent some time up there last week with a local brewer who operates in a similar volume to that which we are hoping to achieve, and to research the beers typical to the area. Notable was the popularity of the hoppy golden beers at less than four percent. I previously had a bit of a phobia of this style but was amazed at how tasty they can be.

At the other end of the taste scale, I spent some time brewing with a start-up micro from America. There are some incredible new styles of beers being developed over the pond that rarely get a look in over here. They are not afraid to try different combinations of ingredients or even new ones. There are new strains of hops and new styles of malts being developed all the time, for example we made a beer using Simcoe hops which became available only a few years ago.

With all these opportunities in the market we are working towards the start of our own business and the location for the brewery is critical to this. We have a great potential opportunity for a new build brewery in North Oxfordshire, with rail links to Oxford and Banbury, in a fantastic tourist spot. With an onsite shop which will hopefully provide an interactive feel to the brewing process we hope to create something a little bit different for the discerning Oxfordshire drinker. Real ale is a great product and the more that people can see and understand the brewing process the better. They can learn how it only uses natural products and can easily surpass other drinks in terms of flavours and styles.

The big ecological issues in brewing are the use of water and energy. Both are used in large quantities; in fact about four and half pints of water can be used to make just one pint of beer, and that must be heated up and cooled down throughout the process. We are looking at ways of limiting the use of both of these resources in the design of the new brewery. Some of you may have read about the new Otter brewery in Devon or seen the green-roof on Adnams distribution centre, these are good examples of the brewing industry looking at new ways to reduce the environmental impact of making beer. Our ambitions are a little more modest at this stage, but we hope to include as many water and energy saving features as we possibly can in the new brewery, without altering the fundamental process to making quality cask conditioned real ale.

Hopefully by the next instalment of our story I can reveal the potential location, pending our moving forward with planning permissions and finalising designs. It will be something you would all definitely vote for.