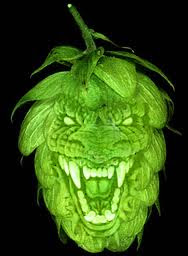 Did you enjoy all those beers at the Banbury Beer Festival? Unfortunately our ales still weren’t there, but the new brewery project is moving along and I have had an interesting and busy couple of months. We are still working behind the scenes and if all goes well we should be up and brewing in a few months time.

There are several brewers now trying out extremely hoppy IPA style beers, influenced in part by the massive levels of hops in some American exports. Following this mid-Atlantic trend, I decided my next extreme brewing test was to see just how many hops I could squeeze into a beer and if there was a limit to this hoppy madness. I brewed up a strong pale ale and loaded it with plenty of bittering hops, then lots and lots of late additions, followed by a few more of the green beauties for luck. The resulting milky green, super IPA went way past 11; a balanced brew it was not. Apart from helping you win a gurning competition or simply to impress your friends for a dare like eating the strongest heart attack curry, there are limits to what makes a reasonable drink. How many little hop symbols, like the chilli levels, would I mark on the bottle? Maybe a slightly more restrained beer next time.

There are an amazingly wide variety of methods used by different brewers to add hop character to their beers. In order to see one of the best examples I travelled north to a leading edge brewery to see their fantastic set up. I saw how they controlled the magic of beer making from what looked like the bridge of the Starship Enterprise. In direct contrast I went along to see a neighbouring brewery whose layout looked rather like an angry tsunami had just come through. Interestingly both made fantastic beer, so it’s not always down to how shiny or big your tools are.

Keg beer is getting more press these days. The bad old days saw some of the most undrinkable chemical fuelled slops pushed out of a tap under gas pressure which even gave rise to a campaign to oppose this method of dispense. However all is not so bad in the brave new world of unpasteurised, unfiltered, modern craft-brewed keg beer. Certain styles of beers, especially the stronger hoppy ones, can take on a whole new dimension when served in this way. Nothing can ever beat the flavours and experience of an exceptional cask ale pulled through a hand pump, but I believe there is room on the bar for top-end keg beers. I have bought a couple of kegs and am trialling a lightly gassed ‘brewery conditioned’ craft beer to see what all the fuss is about. It could well be that we see more of this dispense method for quality beers in the future so it is worth discovering if it is to be a ‘friend or foe’.

Things have taken a little longer than I had hoped on this project, but hopefully the next instalment will be a little less woolly. Until then hoppy drinking.