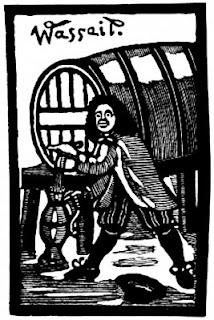 Two of the critical measurements in modern brewing are temperature and specific gravity. Before the mid eighteenth century there was no way to accurately measure either of these.

For setting the appropriate temperature a brewer may have used one of a number of methods. Possibly through trial and error, mixing liquor which had been brought to boiling point with cold water or leaving for a fixed period. There may also have been alternative tactile criterion or a ‘rule of thumb’ with the brewing liquor being heated to the highest degree that the brewer could bear to dip his thumb or elbow in. More commonly described however is the process of heating the water and leaving it to cool such that the steam subsides and the brewer can most clearly see his face reflected in the surface.
An interesting account by William Reddington's Practical Treatise on Brewing, first published in 1760: “inspect his Goods, before he takes the next Liquor, that he may know whether he has committed any Error… If part of the Worts only be let out, this can be discovered by squeezing a handful of [the malt]; and if you find [the grains] more greasy and glutinous than common, you should not take the next Liquor so sharp [hot] as usual”
Even after the introduction of the thermometer, brewers remained suspicious and occasionally used a ‘blind’ or ‘private’ thermometer which had a detachable scale to prevent ‘impertinent pryings’.
There was generally no way of judging the strength of ale other than by taste and comparing the morning after effects. Duty was assessed by a leather trousered ale conner sitting in a puddle of ale to judge its stickiness. By the late eighteen century brewery hydrometers and saccharometers became available, and as specific gravity is temperature dependant, so they must be used alongside a temperature value. These two tools of the trade made huge changes to the methods of work and ability of the brewer to control his brews, and contributed to the shift from traditional porters to more pale styles and much more consistent quality.
In 1817 another of the important changes in the history of brewing was unveiled by a man named Daniel Wheeler: black malt, known as "patent malt" for the patent Wheeler was granted on his malt kiln. Since the arrival of the saccharometer brewers could, for the first time, accurately gauge the amount of fermentable sugar extracted from different types of malt, and they could see what poor value the brown, high-dried malts they used for making porter offered as compared to pale malts.
Historically large wood ovens or smokers have been used to kiln malts. Malts were laid out on a false floor of hair cloth or straw matting and the hot exhaust from a kiln was passed over the malts. A wood fire would be built and the malts baked for several hours. The process would have produced a very uneven and inconsistent roast and passed many of the wood smoke flavours into the malt.
The need for yeast was understood historically, although there was no knowledge of how or why it worked. In the medieval period yeast would have been shared amongst brewers. Since a yeast that produced good ale was valued and shared, good yeast was effectively cultivated. You can however safely assume that the ales made prior to Pasteur’s work would have had significant amount of bacterial and Brettanomyces sourness.
Medieval English ale would not have been boiled after the wort was drained from the grains. This lack of a post mash boil will mean that many proteins knocked out of solution in a ‘hot break’ will remain in the ale. The ale will provide extra nourishment, but also be at much greater risk of infection by bacteria and will probably not be clear due to protein haze.
Historical cooling techniques would have possibly involved pouring the hot wort into a shallow open vat. This however exposes the wort over a large surface area to the air, this will certainly increase the risk of inoculating the wort with all sorts of undesirable organisms. This is fine for some Belgian lambics, which are deliberately inoculated with whatever happens to be floating past. Without a crash cool there will be a lack of a good ‘cold break’ which will leave more protein matter in solution and contribute to more haze in the ale. However as ale was drunk from crock beaker or pewter tankards the appearance was less important than in a modern clear glass.
Posted by XT Brewing Co at 18:02 1 comment: 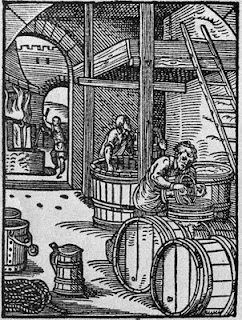 In medieval England the term ‘ale’ referred to a drink made with malted grains, water and fermented with yeast, where as beer was quite a different drink made with hops and employed a boiling stage in its production.

In modern times hops are added in the brewing process for bittering, preservation, and aroma in beer, but this is a relatively recent innovation. Historically mixtures of herbs and other plants would have been used in the flavouring of ales and these mixtures were often referred to as gruit. The addition of hops also allowed beers to be brewed weaker than un-hopped ale.
The boiling stage in the production of beer as compared to ale also had a significant consequence on the preservation, taste and nutritional value. For a beer the wort, which is the liquid containing the sugars and protein extracted from the grain was boiled before the fermentation stage. For an ale the wort was cooled and mixed directly with the yeast and not boiled.
Ale was also often served fresh, only just finished the fermentation stage or possibly even still fermenting, as opposed to beer which would be served stale, where it has finished fermenting and cleared. Contrary to popular myth, ales would not necessarily have been any sweeter than beer. As yeast is able to ferment cider and wine to dryness so it can with ale. Combined with the effects of wild yeasts it may have actually been quite sour and added sweetness may be needed.
The brewing of ale largely remained a home activity in medieval times often performed by women ‘brewsters’, and virtually everyone in England would have drunk ale. By the 15th century, ale making was gradually changing to an artisan activity from a family-oriented one, with pubs and monasteries brewing their own ale and beer for mass consumption. Gradually beer took over as the drink of choice and the distinction between ale and beer became lost in time.
Posted by XT Brewing Co at 17:56 No comments: