The Bermondsey Beer Mile is a popular crawl to some of London's hippest new breweries. It's an interesting view of craft-brewing life in London today - still joyfully in a state of independence and not overtly commercial. How things will develop in the coming years is anyone's guess - but this is a tour worth doing sooner rather than later... before the informal charm is polished away. 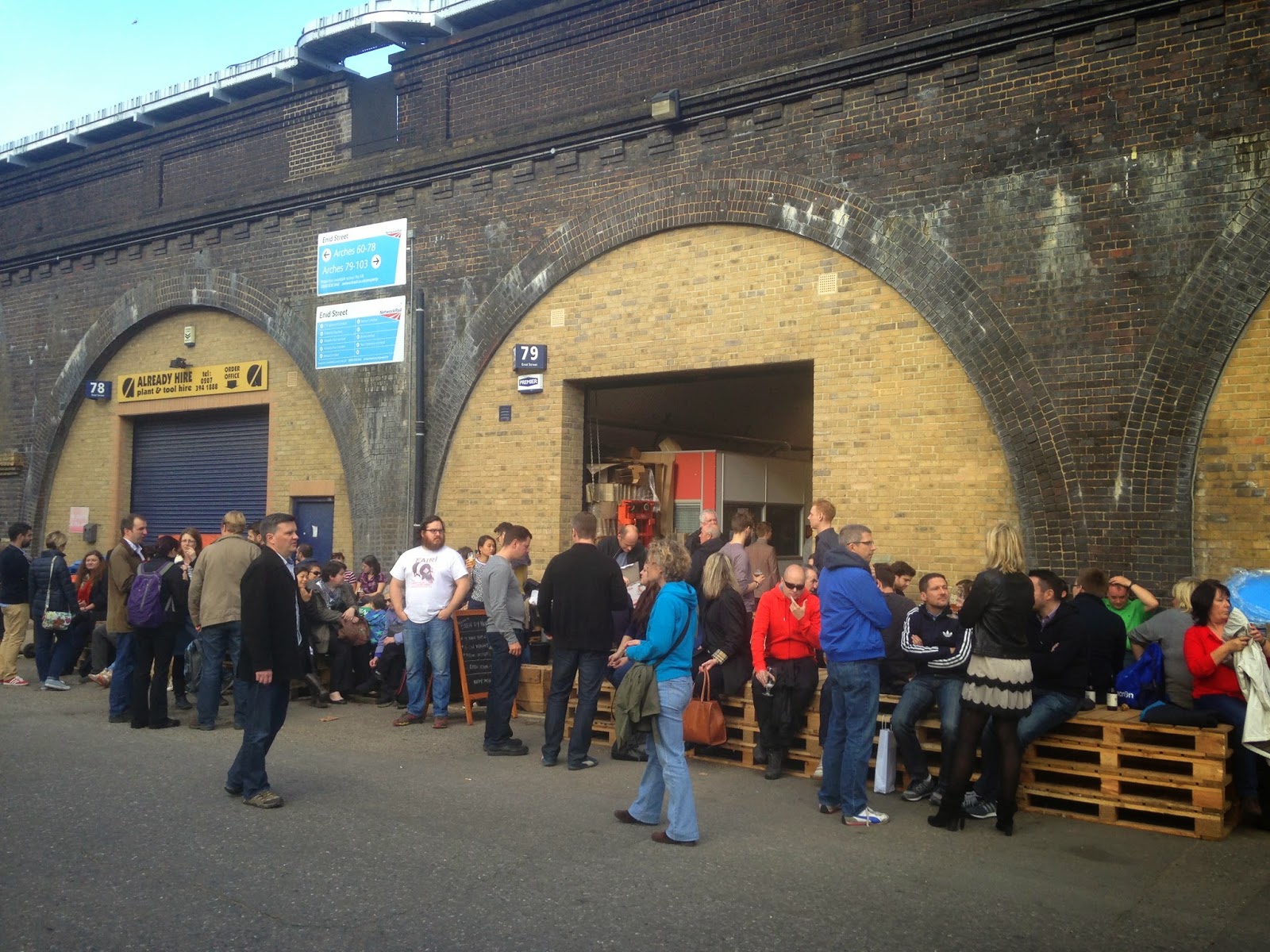 The breweries all set up temporary bars and trestle tables on Saturdays for you to enjoy their draught craft-keg or bottled beers. The breweries are built into railway arches with paved yards to the front. Mostly the beers are strong IPAs, hefty stouts and porters or whacky Saisons and experimental brews - didn't see a session bitter all day. There were quite a few 'table IPAs' under 3% available too - surprisingly tasty. The beers on draught were sold in 2/3 pint glasses.

The trestle tables, working brewery surroundings and slightly ramshackle feel all make for a very sociable day - we found all the other beer tourists very friendly (especially as you will generally be trailing each other all day) and every stop would be a babble of chatter among similar minded beery folk.

The tour is made up of seven breweries and one bar, and for ease I would suggest starting at the furthest point and working your way back towards central London. The breweries are generally open from 11am to about 5pm on Saturdays - except Kernel which closes at 2pm. This makes things a little tricky as they are the mid point. So if you realistically want to do the whole set you'll need to start early.

To start the tour head for London Bridge station and the overland 'Southern' trains. You need platform 14 and the train to South Bermondsey. The train journey is just 5 minutes and they run every 15 minutes. 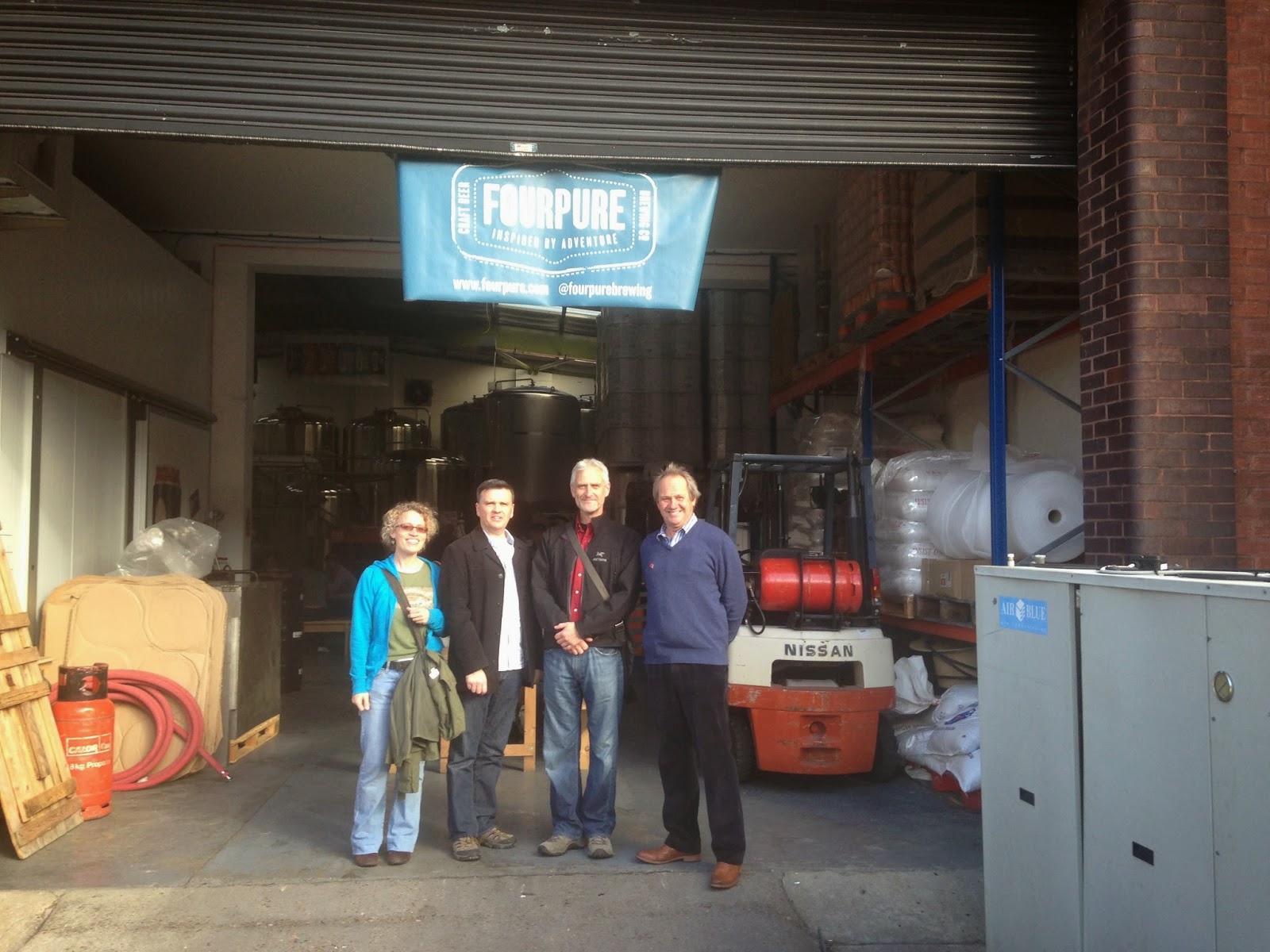 Fourpure Brewery is probably my personal favourite; it's a professional looking set up and one of the largest. They purchased the 20 barrel kit from Purity Brewing. Their beers are all sold in keg or can - yes cans! Cans may have a reputation for holding the most awful of beers and to many should only be used by louts and tramps - but honestly - give it a try and you will be very pleasantly surprised.

Next head to Partizan Brewery - 8 Almond Road, SE16 3LR - 0.4 miles. Walk out of the trading estate and turn left back the way you came. Then take the next major right up Galleywall Road. At the end of the road turn right and then immediately right down Almond Road. Partizan is in an arch on the left around 300m down the lane. 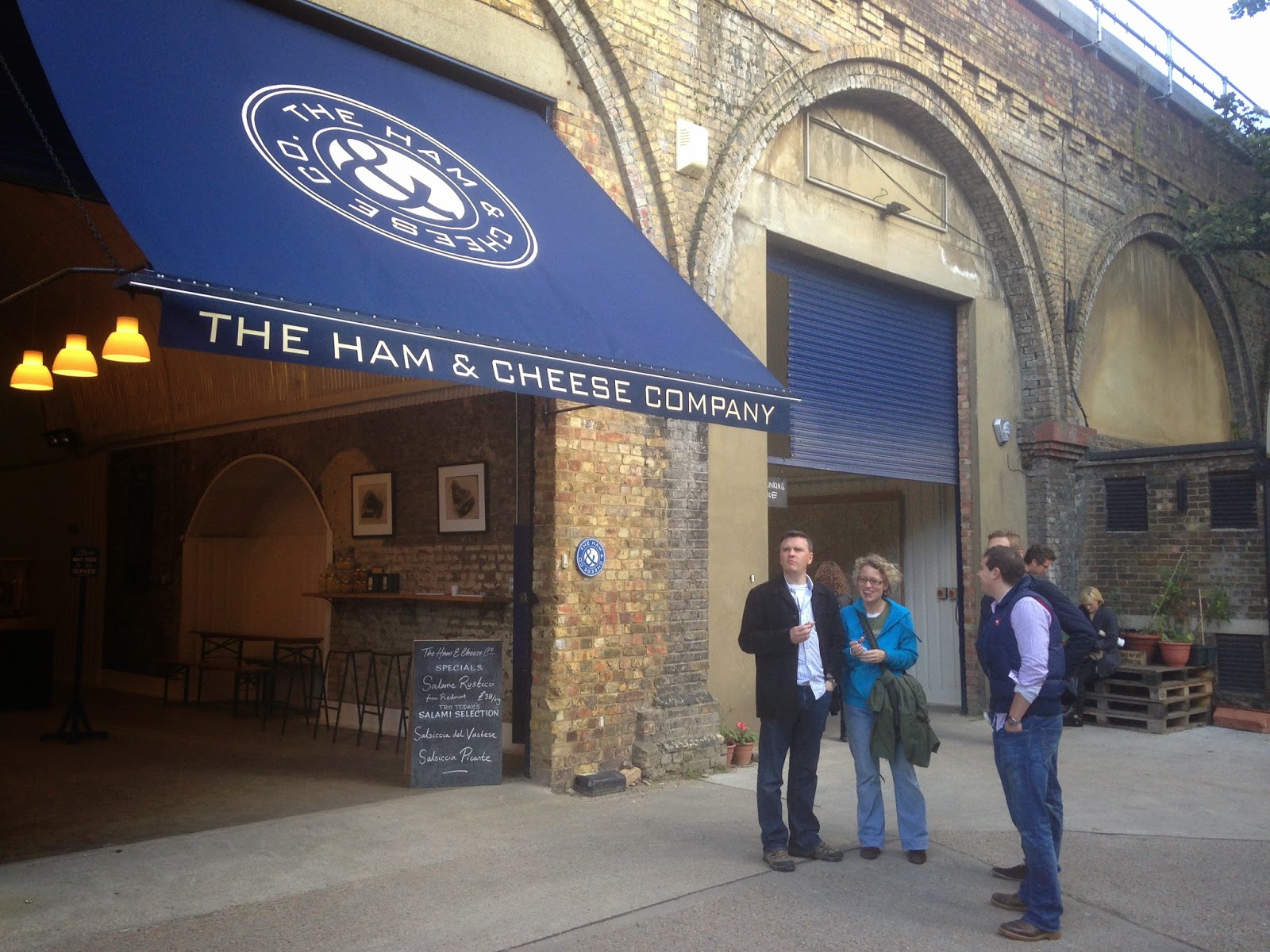 Partizan is rather different to the orderly Fourpure, seating is outside on pallet stacks and a temporary bar is placed in front of the brewkit. The brewery itself is amazingly squashed into a fairly small railway arch, the 6 barrel plant came from Kernel. The beers are all one-off specials and they use more unusual ingredients.

After Partizan go on to Kernel Brewery Arch 11, Dockley Road, SE16 3SF. This is 0.7 miles away and will take around 15 minutes. Return to the top of Almond Road and turn left, then carry on until you turn right down Blue Anchor Lane, then cross St James Rd, with the railway on your right, go down Lucy Road and Kernel will be on the right. 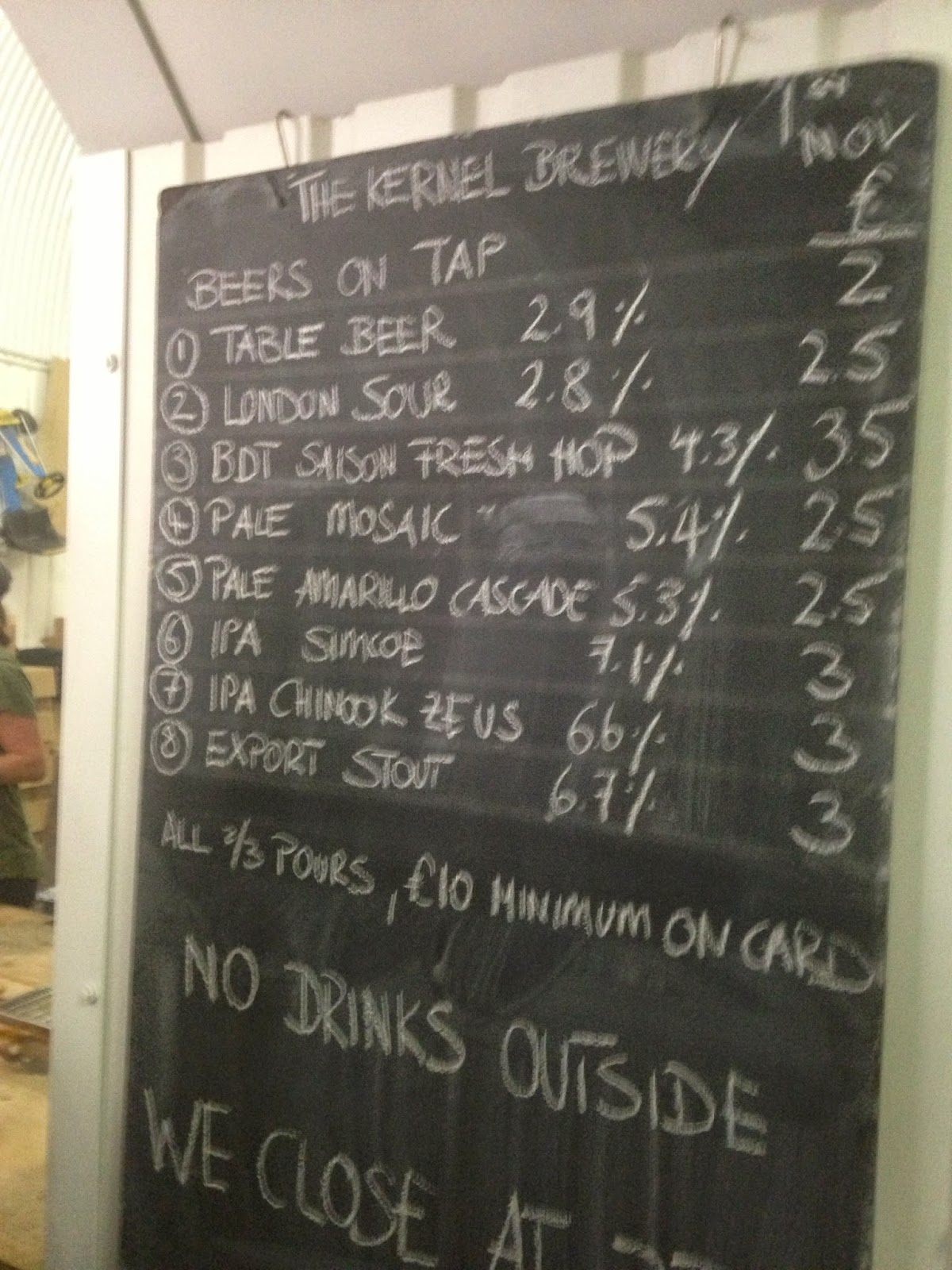 Kernel is the original and set the mold for this south London 'new-wave' of breweries. They are the one everyone wants to copy and they also started this Saturday-at-the-brewery trend. There is a huge range of beers on tap and bottle. Right next door is a bakery and cheese maker and several people were in the brewery enjoying their bread and cheese lunch with beer. Brew by Numbers - again quite a lot of equipment and stock all piled into a railway arch and the temporary bar area opens out on to the yard in front. A fine selection of beers all number coded by style / recipe - now who would number their beers? Silly idea!

Lunch Time! There is an artisan street market selling all kinds of cracking food called the Maltby Street Market. Leave Brew by Numbers along the railway arches until you reach Abbey Street and turn left then first right down Gelding Place. The market is in this area. There are lots of street traders along here and plenty of places to enjoy a hearty lunch (if a little pricey) 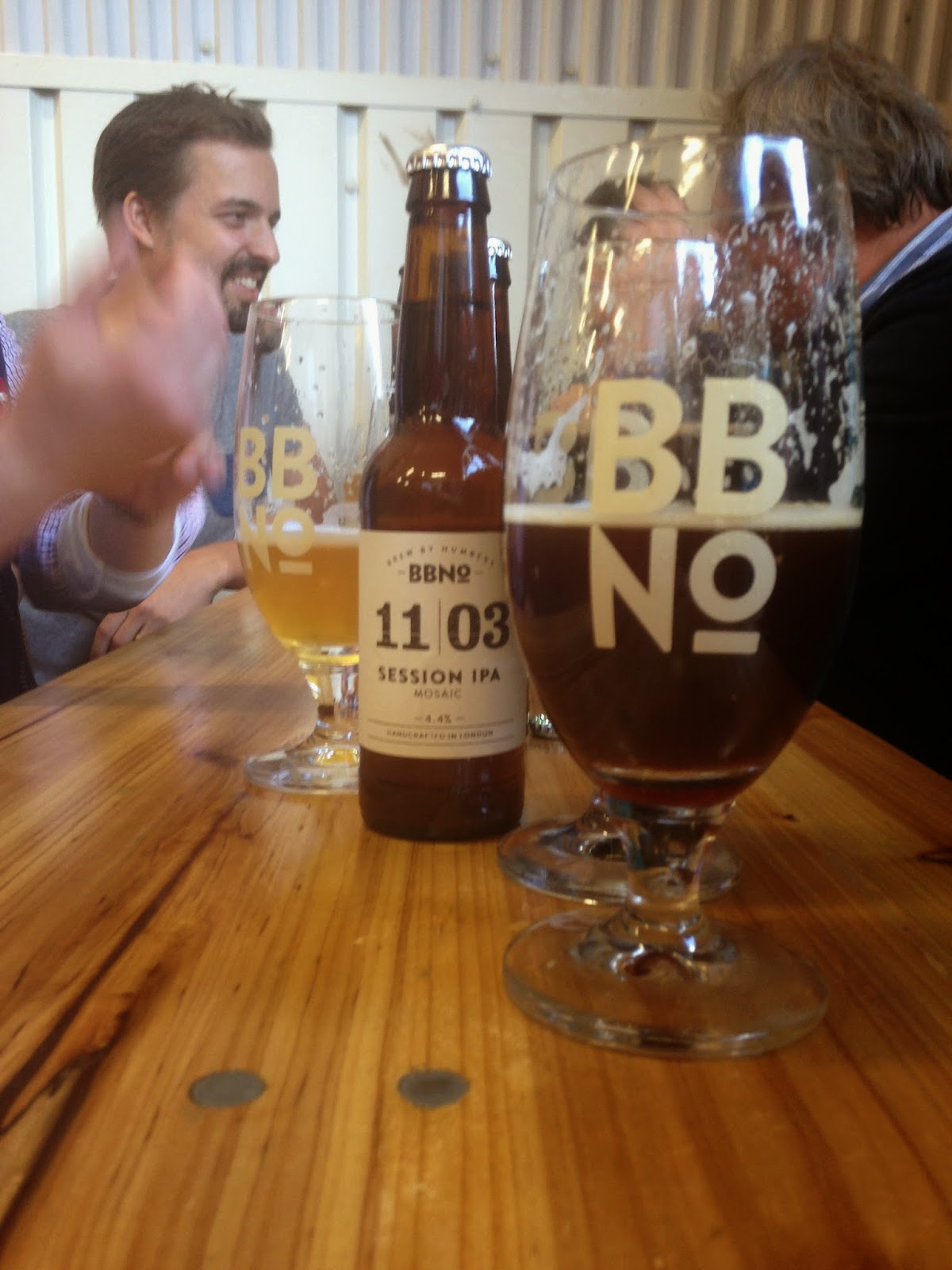 Next up is Anspach & Hobday and Bullfinch - 118 Druid Street, SE1 2HH. (Two breweries in one) 5 minute walk, 0.3 miles. Walk to the top of the market street with the arches on your left, then turn left down Millstream Road and back under the arches. Turn right onto Druid Street and Aspach is on the right hand side.

The two breweries here offer some indoor seating and a fairly wide range of beers.

Next door is the Bottle Shop - this is worth a visit as it fits in with the character of the day and is both an informal shop with a range of bottled beers and a bar with seating on a mezzanine area under the railway arches. We enjoyed an excellent tasting session with Weird-Beard Brewery who were doing a meet-the-brewer night.

Also in the same arches is the newest of the breweries in our crawl: Southwark Brewery - newest and yet the only one of the group to make their beers for cask. The brewery was only a week or two old when I visited and we had a very interesting chat with the guys there talking through their set up. 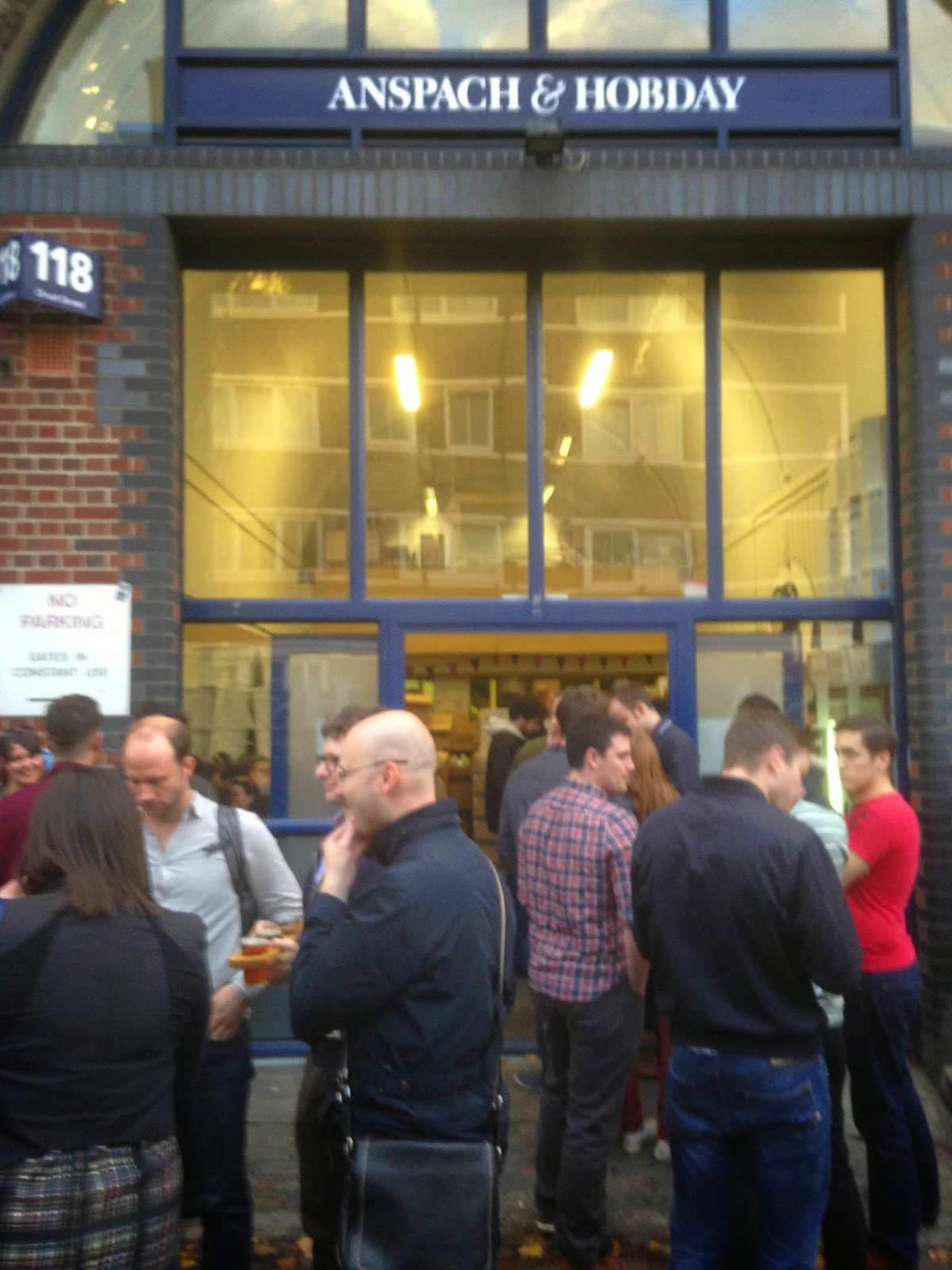 By this time it was early evening and the last visit of the day is very close to Tower Bridge - the Dean Swift pub - this is tucked away in a side street under the once mighty Courage Anchor Brewery.


Thanks to North Oxon CAMRA and John from Turpin Brewery.
Posted by XT Brewing Co at 15:52 No comments: